It occurs to me that it doesn't really feel like a Pioneer Square art walk anymore, sure there are still good spaces in what is actually Pioneer Square (Lawrimore, Davidson, and J Harris)  but all the other galleries are really east of the Square now, I mean surely the TK building isn't in Pioneer Square...but it's not quite in the ID too...any who, WHO CARES!

Maybe I'm just thinking about this as spaces like Cullom Gallery and Prole Drift draw more and more folks further East.  Plus with all the artists now filling up the INS building, and if they continue to be open each art walk like they were tonight - they may well replace the hole left behind by the demise of 619 Western.

Any who, it doesn't really matter, this is a MOLORAZZI post and you know what that means - time for awkward photos of art and artists from some of the shows I saw tonight: 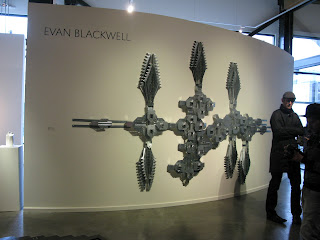 I had no idea that Evan Blackwell had new work opening tonight, at Foster/White - the gallery that all the haters like to hate on...but the thing is, there's a lot of good stuff at the F/W - especially when they are showing artists like Evan, who explore materials in very challenging ways - this ain't your dad's Foster/White 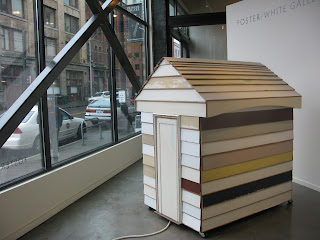 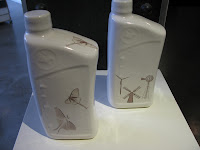 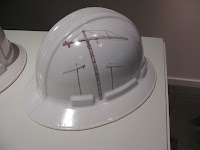 More work by Evan - in porcelain 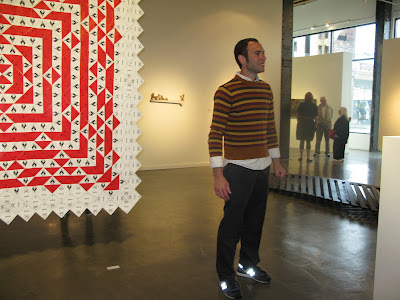 And Mr Blackwell himself, in a perfectly awkward Molorazzi pose! 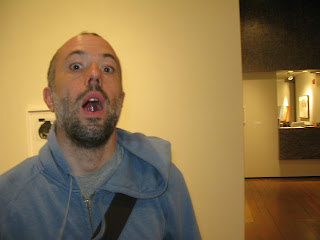 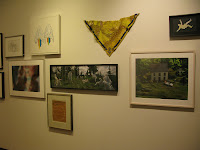 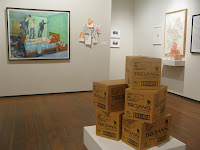 2 shots of the group show centering around gay themed art (and artists) which ties into the highly acclaimed show currently up at Tacoma Art Museum:  Hide/Seek.  This is also at Greg Kucera 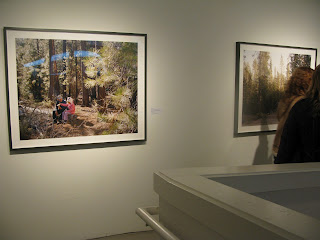 A quick and ugly shot of Eirik Johnson's work at G. Gibson.  His pictures draw you in, these abandoned mushroom camps and other structures ave very intriguing  - it reminds me of the work of that famous photographer couple...what the hell is their name...ah, the Bechers, thank you interwebs. 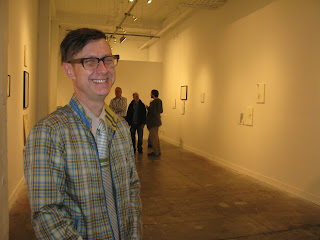 Robert Yoder being a good sport and smiling for the Molorazzi at his very handsome solo show at Platform Gallery. 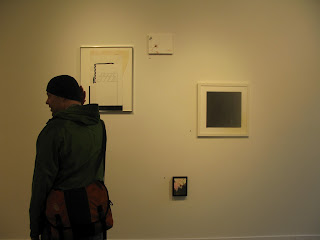 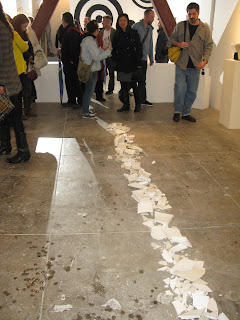 Erin Shafkind's piece in the middle of Text Editor, at SOIL.  [revised ] This shot is a rare moment when the crowd was open - most of the time I was there it was so crowded that some patrons stepped right on the piece before even knowing it was there - which created this weird feeling...were you supposed to step on it or not?  No one was telling anyone not to....because of that it sure seemed like it was intended to be walked on....but...the sound it would make sent shivers of pain through my Museum Security Guard body. 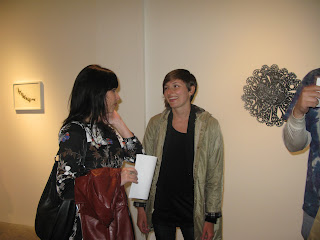 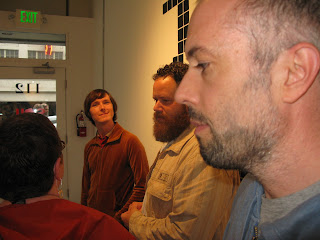 Artists Shaun Kardinal, Joey Veltkamp, and Curtis Erlinger (oh crap, now I gave away his name) in close up profile, does it get any more Molorazzi than this? 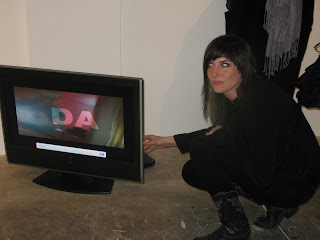 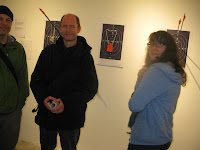 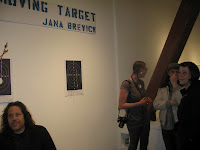 On the left we have Erin Shafkind (on right) and friends; on the right we have Jessie Higman, Jana Brevick, and friends in Jana's backspace show, Moving Target, also at SOIL. 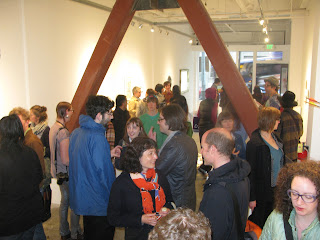 ,
The crowd at SOIL, with many famous artists mingling.  Also, nice job SOIL in renovating your space, it's way better with this lay out.  Very smart change. 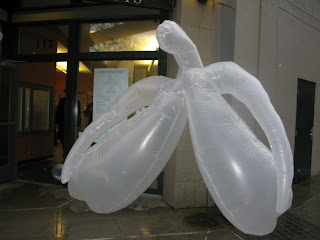 I don't know what this was about 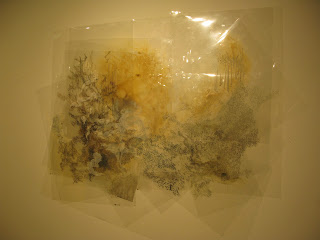 Nice mixed media layered pieces at Core Gallery by Aaliyah Gupta - acrylic on duralar, which seems to be overhead plastic, or something like that.  Is the use of transparency becoming a trend? 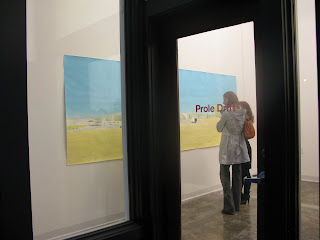 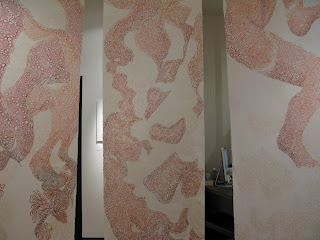 A large print hanging piece at Cullom Gallery for Brian Lane's curate Texture of Being
Posted by Molo at 11:21 PM

I wanted to clarify, Erin Shafkind's piece was actually meant to be confrontational, and potentially destroyed further over the course of the exhibition. Except for one individual who aimed to stomp on it repeatedly, but he saw the harder side of the curator before the end of the night ;)

Ah yes, thanks Sharon. I revised my comment. I spoke to Erin about it and she seemed like she didn't intend for so many people to step on it - but that it was okay that they were - maybe it was just the surprise of so many visitors; with the notable exception of that one fellow...

The piece outside of the TK lofts was from the show that Lynn Schirmer curated called "After Dinner Party." From the images that I saw, it looked like it was a great show, and I'm a little sorry that I missed it (as well as all of the other great shows at the TK last night). And, well, if you're not sure what the piece was supposed to represent, take a look at the description here: https://www.facebook.com/#!/afterdinnerparty/info. I'm not gonna be the one to tell you... :)